The other day I read this headline from the New York Times; “U.K. Bans Advertisements Depicting Gender Stereotypes” and just like that, I became a victim of today’s Modern Headlines. 1 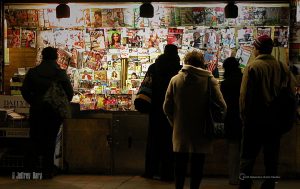 At first blink I found this statement to be intriguing in its meaning. I am unclear about my opinion at this moment as to the long-term value of this regulatory action. I also understand that overt “harmful” stereotyping could lead to more unwanted behavior and too frequently has the “real” effect of limiting “those” people’s opportunities. So, what actual role do advertising and marketing have in this conversation? I don’t know. 2

Will the “regulators” consider future regulatory policies for movies? Performing arts? Will Shakespeare be rewritten because role models used are inconsistent (let’s ignore that actors at the time of Shakespeare were all men as I recall from my history and associated classes). Men and Women are different. There are people who blend, switch, have different needs and wants; even my LGTBQ friends, family, and colleagues recognize differences. Again, none should be boxed into an outcome that the advertising is directed toward via its persuasion, driving sales, or other brand promoting related matters. 3

In a Blink of an Eye…

I soon realized that I was quick to spiral into my intellectual queries of responsible governance in today’s Modern World inspired by what I would soon discover as a somewhat “irresponsible” headline written obviously to incite and sell more papers (profit).

As I am normally forced to do nowadays (and that I encourage my children to do as well) is to vet what I read before choosing to publish and broadcast… I decided to dig further.

What a difference the inclusion of “Harmful Gender Stereotypes” makes in communicating an accurate Headline.

As I write, … should advertising be so regulated? Is advertising’s use of gender roles limiting opportunities? Is this overreach? Or, do the Brits have something we don’t know about here in the “States”?

I’m simply curious as I think about this issue and how it relates to our Modern Evolution in today’s civilized society.

If you would like Daniel to speak to you or your Professional Group and bring clarity about the new frontier of the new business tax law changes. Please contact us.

No Replies to "Regulating Gender Stereotypes"